The Sudden Death of One of My Formation Flying Friends

Stephanie and I attended a celebration of life event at the Pitt Meadows airport in British Columbia last week for Rick Johnson.  I lead Rick out on his very first formation flight some years ago.  The first time out was a humbling experience for Rick as it is for most people but his steady efforts qualified him to participate in the annual Bonanzas to Oshkosh mass arrival.  A few years later Rick was promoted to “Element Leader” of one of the three ship elements.  Stephanie and I have had the pleasure of a number chance meetings with Rick and Marlene over the years.  It seems that we enjoy many of the same places and events.  Rick’s last flight in his 1960 M35 Bonanza was from his home base at the Pitt Meadows airport to the Victoria Flying Club at the Victoria International Airport.  One of his air traffic controller friends reviewed the flight records and could find no issues with Rick’s last flight.  He passed away while sitting in the flying club lounge not long after he arrived there.

A large group of people gathered at Pitt Meadows to celebrate Rick’s life.  We were very glad to see how many friends Rick and Marlene have and I am sure that they will be a great source of comfort to Marlene going forward.  While Rick’s Bonanza will be sold his brother will move his Cessna 182 into the hangar that Rick and Marlene have owned for many years.  Their hangar is much more than a place to store the airplane.  It is more like a vacation home which overlooks the Frazier River to the south.  This arrangement will help Marlene stay connected to the airport community.  I am saddened by Rick’s sudden passing but I am also pleased to see the strength in the aviation community at Pitt Meadows.  Stephanie and I felt that we were a part of their community while we were there. 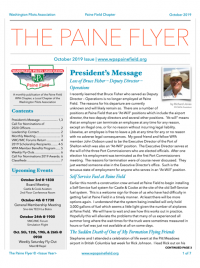