Memorial and Final Flight – A tribute to a fellow pilot

Craig Hogan was a remarkable man with many friends. I first flew with Craig in his plane on a weekend fly-out to Seaside OR. In 2015 he flew with me to Oshkosh. On that >2-week trip I gained such respect for Craig as a pilot and person, with good judgment, attitude, and skills, that I considered him a good friend.

Craig did not vocalize his experiences or skills, but just went about getting things done. He was a Marine who served our country honorably. He was a devoted husband to Carla, and he made it a point to have their “date night” each week. He was successful and respected in business. Craig was a good pilot, who loved to fly in his Diamond DA 40 and enjoy the freedom and views from above.

When he had a medical issue that suspended his medical, he chose a few qualified fellow pilots to fly his plane on our WPA flyouts so he could still enjoy being in the air as a passenger and co-pilot. Craig diligently pursued his treatments and his health condition improved so he pursued the FAA’s procedures and succeeded in getting his medical reinstated (not a simple process). Then he was able to re-qualify as PIC to again enjoy flying his DA 40. When a medical diagnosis became terminal, he chose his destiny with dignity and consideration for his family. Craig, I trust you are now enjoying the view from above and that you also know you are a valued friend who will be remembered and missed by many. 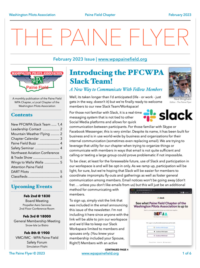