On January 21, 2020, Richard Beckert, Jerry Barkley, Rich Jones, and Stephanie Allen met with Ryan Zulauf at his office at Paine field. Ryan’s manager Arif Ghouse also dropped by for part of the discussion.

The purpose of the meeting was to follow up on issues raised with the Snohomish County Council in early December and see what actions were being taken. Topics discussed included:

I and others from WPA will be meeting on a regular basis with Paine Field management to ensure our concerns are being adequately addressed both now and in the master plan update. 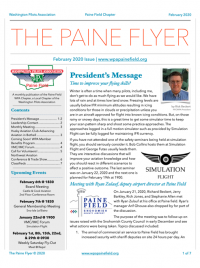