Call for Nominations for 2019 Awards

Send e-mail nominations to president@wpapainefield.org. Awards will be presented during the Christmas Party.

Pilot of the Year

This is the highest award the Chapter may give. The nominations shall be a licensed pilot judged to have made outstanding contribution(s) to the advancement of general aviation throughout the past year. Recipient of this award shall be nominated for the State WPA Pilot of the Year competition.

Sponsor of the Year

To be awarded to the individual, group, or company who contributes most significantly in helping the Chapter to achieve its stated goals. This contribution should not be a financial one but rather should be based on the greatest contribution of effort, expertise, donated services or facilities and leadership training by the example it sets.

Spark-plug of the Year

This Award shall be given to the person or persons, who by their enthusiasm, talent, leadership ability and hard work inspire others to get involved and actively participate in the projects of the Chapter.

The Wright Stuff Award shall be given in response to circumstances surrounding an incident that required outstanding flying or judgment. The criterion is that the aircraft must have been under power with a pilot in command. 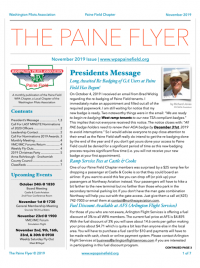