Someday, somewhere West of the Cascades of Northern California, Oregon, or Washington, a massive magnitude 8 plus earthquake is due to hit that happens about every 300 to 500 hundred years. When that day comes General Aviation (GA) will be called upon to assist many communities as a lifeline to render aid for those communities.

The DART pilots of the West Coast General Aviation Response Plan (WCGARP) under leadership from the Emergency Volunteer Air Corps (EVAC) along with ground support teams, commercial resources, emergency response resources both at state and local levels, along with many others, train annually for this event. The knowledge gained furthers our state’s readiness for a major disaster.

The drill was a coordinated response between the forward DART hubs of Bellingham International and Renton along with critical communication support by Kenmore DART HAM’s (Northshore Emergency Management Coalition Amateur Radio). The overall response was multiple flights to Walla Walla and Point Roberts.

The Kenmore DART HAM’s communication was a key aspect to save the critical resource of seaplanes based on Lake Washington at Kenmore Air and Northwest Seaplanes. This was accomplished by the Renton DART overflying the Ballard Locks followed by the Kenmore Air base and radioing in that the locks had failed. This was monitored by the Kenmore DART HAMs who successfully relayed the message to WC EVAC DART at BLI and to Renton DART to inform Northwest Seaplanes. In a disaster, the seaplanes would evacuate to Float Haven at Lake Whatcom.

Renton DART also checked the pass highways before flying on to Walla Walla and let the National Agencies know the extent of the disaster. The report triggered a virtual test of the nation’s aviation fuel system from Epic by estimating how long it would take to redirect fuel resources to Walla Walla and keep the planes going. The test revealed the supply lines for aviation fuel would need to shift for both the east and west side of the Cascades.

The Pierce County Health Department donated valuable PPE to both Walla Walla and Point Roberts. The donations were ground shipped to the Renton Dart location where one plane flew to Walla Walla and another to Bellingham International. The latter checked in with Bellingham DART which checked with Point Roberts via HAM before heading out to drop the load. The first multi-airport relay for DART and EVAC.

About a month earlier, Bellingham International WC EVAC DART kicked off a local food drive with the Lake Way Fred Meyer being the public drop point. This store has been committed to the community and without which this would not have been possible. This was further supplemented by my own place of work, Eden Home Health, who not only donated food through its own internal food drive but also PPE. In addition, the Center for Independence also donated food.

Meridian U-Haul donated multiple trucks over multiple days. With the help of the Civil Air Patrol, Bellingham Food Bank, and Center for Independence, donations were distributed between two trucks that were set up with one for out bound food and one for local distribution.

The BLI WC EVAC DART annual food drive collected a total 4,301 lbs. of food and PPE of which 2,930 lbs. was flown out and split between Point Roberts and Walla Walla. What was not flown out went to the Bellingham Food Bank. This was double the donations of last year.

Todd Holloway from the Center for Independence was flown to Point Roberts which gave this community exposure to another disaster response resource that specializes in helping those with disabilities.

The regular Bellingham crew of Puget Sound Energy HAM operators who volunteer in support of this effort, did an amazing job coordinating efforts not only at the Bellingham site but also between all locations throughout the day. This was a major test for the Point Roberts PREP team and Point Roberts Amateur Radio Club (PRARC) operators and even included an operator in Canada, making this an international affair.

As the above was taking place, flights of PPE, food and the Red Flight/scouts we’re all heading to Walla Walla where the Walla Walla DART, Gorge Aviation, Civil Air Patrol and a whole lot of response resources processed the incoming loads.

A huge thank you goes to Gorge Aviation who provided crucial assistance that made this all run smoothly. Some of their staff even come in on their time off to help with the effort. The food that was delivered to Walla Walla went to the Blue Mountain Action Council and the PPE donated by the Tacoma-Pierce County Health Department and Eden Home Health was delivered to the Walla Walla emergency management. Brian Kelly from the state of Texas, who is the National Air Traffic Controller for EVAC, was present to assist on site. Moreover, there were pilots from around the state of Washington, and at least one from Oregon, who flew into Walla Walla to drop food.

For the pilots I can never express in words adequately the gratitude that I and others have for what you do. It’s doing what you enjoy, but for those on the ground, it is literally life changing. You provide this ray of hope that this physical life line of help can get to those in need with what is needed. We can’t thank you enough.

For everyone involved in this effort, from the Civil Air Patrol, Lake Way Fred Meyer in Bellingham, the Safeway in Walla Walla, Walla Walla Emergency Management, Puget Sound HAM’s on the West Side and ARES on the East Side, the DART’s at the multiple hubs, Northshore Emergency Management Coalition hams, the state wide pilots list, the PREP teams/ Point Roberts Amateur Radio Club (PRARC) and additional support at Point Roberts, Meridian U-Haul and everyone who has invested years into developing this effort, a tremendous thank you for helping pave the way for a far better future for many.

When the time comes the WCGARP will be ready, we will have been trained and, for many communities, all this prep will have equaled lives saved. 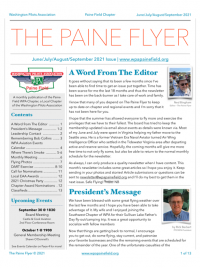