I just returned from the Hood River Fly-In this weekend and made a video of my adventure. As president of local EAA Chapter 84 on Harvey Field it has mention of the chapter; had to stop Saturday morning and conduct a board meeting.

Any WPA members who have not visited the WAAAM have been missing a great museum. Not just at the Fly-In, but the 2nd Saturday of each month is their Fly and Drive Day. They give rides in the vintage cars; sorry, no plane rides. In 2019 at the Fly-In I got a ride in a 1917 Stanley Steamer!

While I very much like the Museum of Flight, I kind of like WAAAM a bit better. MoF planes are nice shiny static displays, but all WAAAM planes are airworthy and all fly – and their cars and motorcycles drive. I complained to them this year because I thought many of their planes were too shiny. I go to WAAAM to see some dirt and oil on the planes and to see a 1930 plane that looks like it is still 1930 and it flew yesterday. What museum in the world would restore a 1910 Curtiss Pusher and fly it? WAAAM did!

I made a video of the 2014 Fly-In that shows the Pusher flying, and even the engine-out crash that did very little damage. 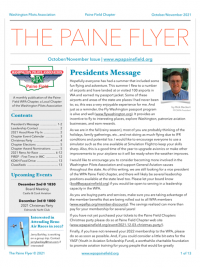